You are here: Home / Archives for cooperative learnign 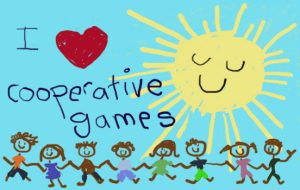 In an experiment profiled in a recent British study1, students helped out a person who pretended to be hurt much more if they thought they were on the same soccer team as him. So it’s not just a person’s level of altruism, their beliefs about others, etc. Really we help one another out largely because we construe ourselves to be on the same “team”. The sense of being on the same team promotes helpfulness. Likewise, according to the book I am now reading The Psychology of Group Aggression2, construing another person as belonging to a different team promotes aggression! Plainly stated, when we think we are on the same side we tend to be nice—but put us on opposite sides, and the meanness comes out. Teachers, we can put this scholarship to good use: bring on the cooperative games! Kids of any age forget about group identification and who’s in and who’s out. For a time, they feel that they are on the same team. This promotes helpfulness and mitigating aggression.

1. See: Personality and Social Psychology Bulletin at this address